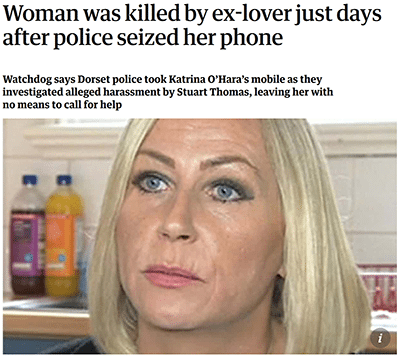 Police forces in England and Wales will provide temporary mobile phones to people at risk of domestic violence when their phone has been taken for investigative reasons. The recommendation from the Independent Office for Police Conduct’s (IOPC), accepted by police chiefs, follows the murder of woman in Blandford Forum, Dorset. She was left feeling afraid and vulnerable after police took her mobile to investigate her allegations of harassment against her ex-partner, the Press Association reported. He subsequently murdered her.

Police forces’ adherence to ‘Clare’s Law’ varies vastly across England and Wales, figures obtained by the Bureau of Investigative Journalism show: disclosure rates are between 3% and 98% under “right to know”, and 7% and 76% under “right to ask”.

The Domestic Violence Disclosure Scheme introduced in 2014 allows people to ask police if their partner has a history of domestic abuse. The scheme has been dubbed Clare’s Law after Clare Wood who was murdered by partner George Appleton, a man known to Greater Manchester Police and who had a history of violence against women.

This month a Hartlepool woman, who endured a six-hour long assault by her boyfriend, went public to urge other women to use Clare’s Law. She did so only after the attack. “I found out that he had previous convictions for violence against women. I only wished I had done this sooner because I would have left him straight away,” the Hartlepool Mail quoted her as saying.